A Higher Perspective On Drones at CSArch

The design process at CSArch is evolving with the use of Unmanned Aerial Vehicles (UAV), or drones, as a tool for building condition surveys and site inspections. From analyzing existing conditions with 2D and 3D maps, to cinematic aerial images and video for marketing, drones provide CSArch with data-rich, visual building information through all stages of design. 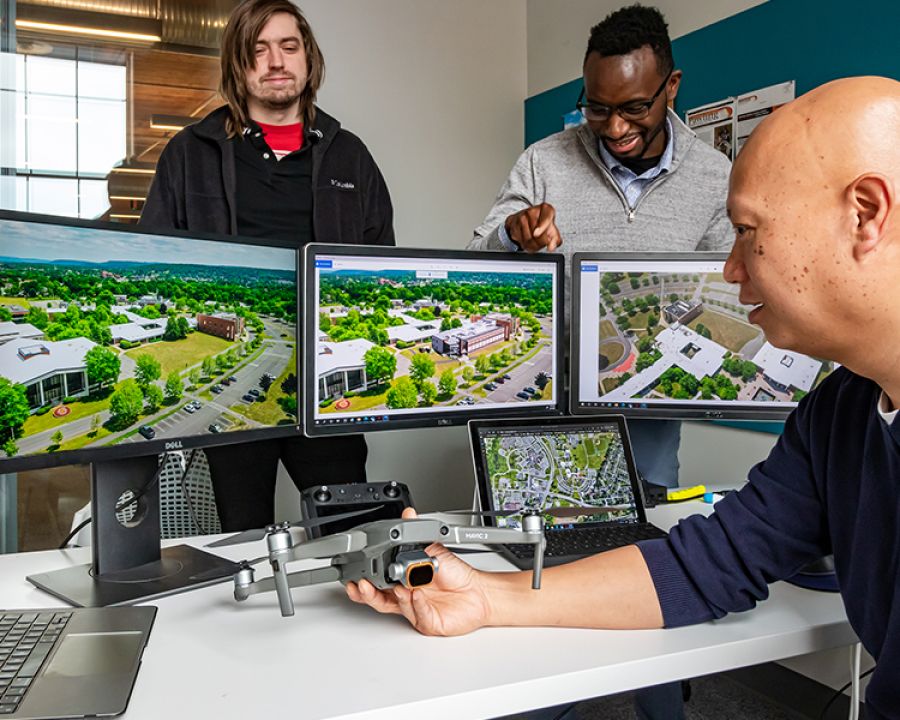 Two years ago, I passed the Federal Aviation Administration (FAA) Part 107 Aeronautical Knowledge test to become a licensed commercial drone pilot. While licensure is a critical legal requirement to use drones at CSArch, it also provides a strong foundation to safely operate drones on project sites.

Since getting my license, I have helped our designers get a better view of their projects by offering a birds-eye view from high above. Drones reduce the need to place our staff and resources in a position of risk and offer a rapid and economical way of acquiring data, images, and video. We are just realizing the benefits of drones in the design process at CSArch – here are a few ways drones are helping us.

We use drones to create 2D orthomosaic maps to improve our building condition surveys, roof inspections, masonry evaluations, and building envelope analyses. Put simply, an orthomosaic map is a detailed, two-dimensional representation of an area, created from many photos that have been stitched together and geometrically corrected to accurately depict building conditions. This mapping technology allows us to perform a detailed roof inspection in less than an hour, whereas traditional methods can take a full day.

Before arriving on site, we program our drone to fly independently in a pre-determined flight pattern, which can be saved and replicated for another day. Think of this as an auto-pilot setting where the drone does all the flying for you. In the example below, our drone flew in a “lawnmower” pattern over a local high school capturing over 200 images. These images were stiched together to create a extremely detailed image of the roof. An immediate, real-time view of existing roof conditions is a significant improvement over Google Maps, where satellite images are outdated or taken in low-resolution. Repeatable, accurate flight control makes a drone the ideal tool for mapping a project site or even an entire campus. 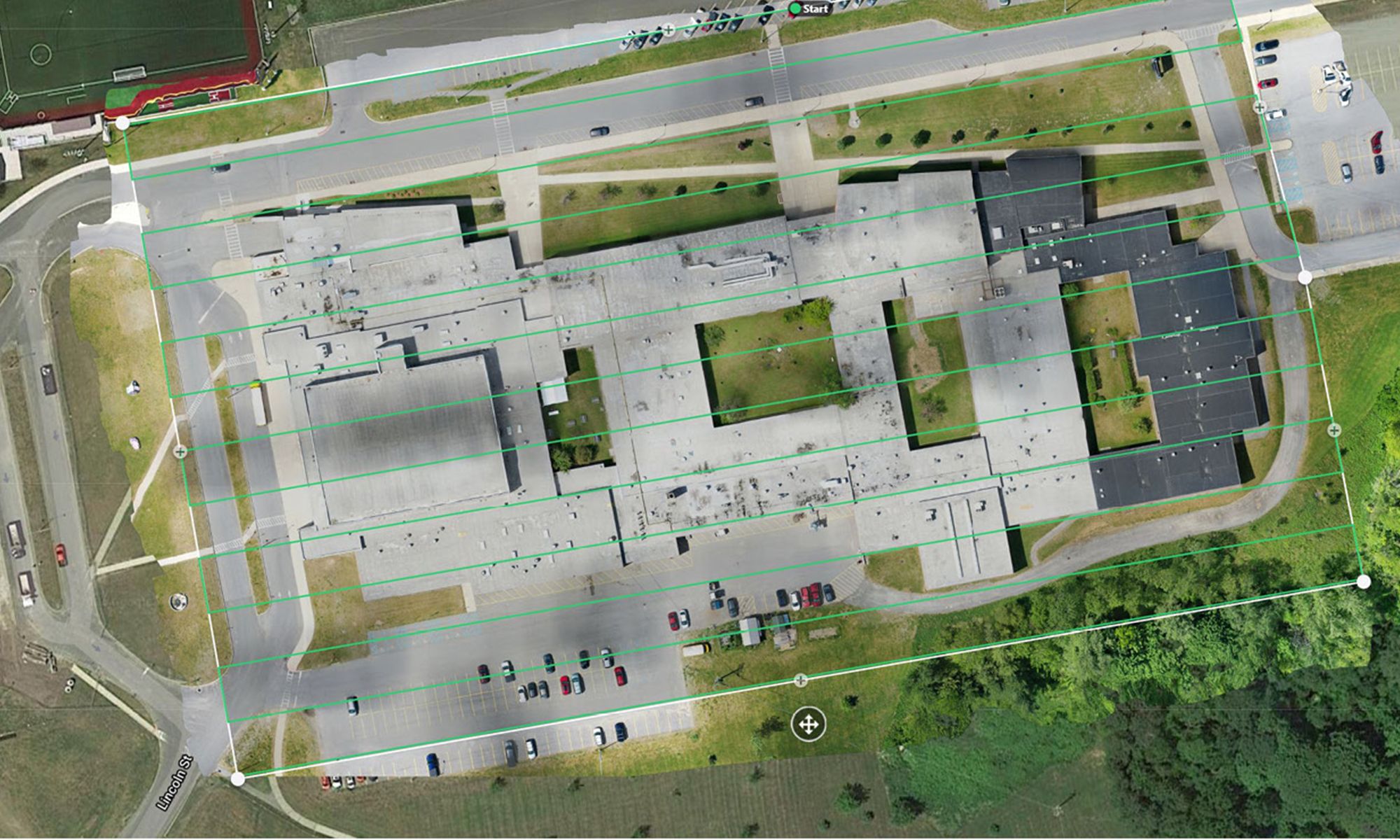 To create an orthomosaic image, our drone is programmed to fly a pattern over a building, taking hundreds of photos that eventually get stitched together. The green line shows the flight pattern of our drone over the roof being evaluated. 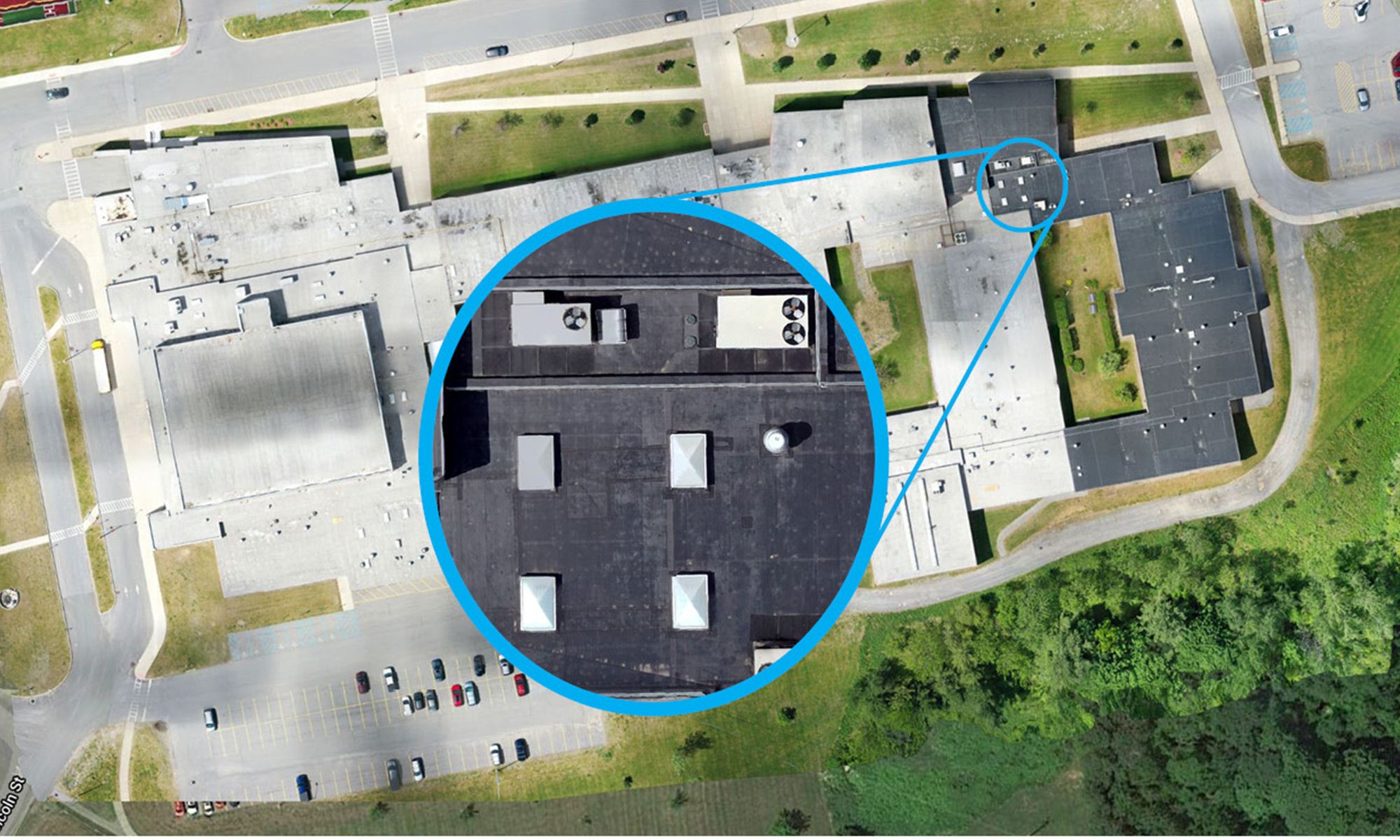 The orthomosaic image above provides a detailed, real-time image of a roof for inspection. This image contains a lot of digital information and can be zoomed in to 0.5 inches per pixel to see intracate details of the condition of the roof.

In addition to orthomosaic maps, drones provide us with other important data to evaluate roofing systems. Elevation layers allow us to view the elevation of the roof by using digital surface models (DSM) for buildings and digital terrain models (DTM) for landscape. Digital surface models display the heights of all buildings within the map. Additional tools within the layer allow us to explore data more deeply through a perspective of the elevation and depth of each area of the map.

We can also use drones to measure distances and square footage areas of a roof. Our team can quickly outline different areas of an orthmosaic map, like certain sections of a roof, and take survey-grade measurements. Our tool set includes measuring distance, area, and volume. Not only can we get measurements for horizontal planes, we can use the flight data from the drone to understand the elevation of each surface. This allows us to get accurate measurements for sloped surfaces, including ridges, hips, valleys, rakes, and eaves. Traditionally, measurements were taken by hand, which took days for a high school of this size. Using a drone image to analyze and measure a roof takes minutes without putting our employees in potentially dangerous situations. 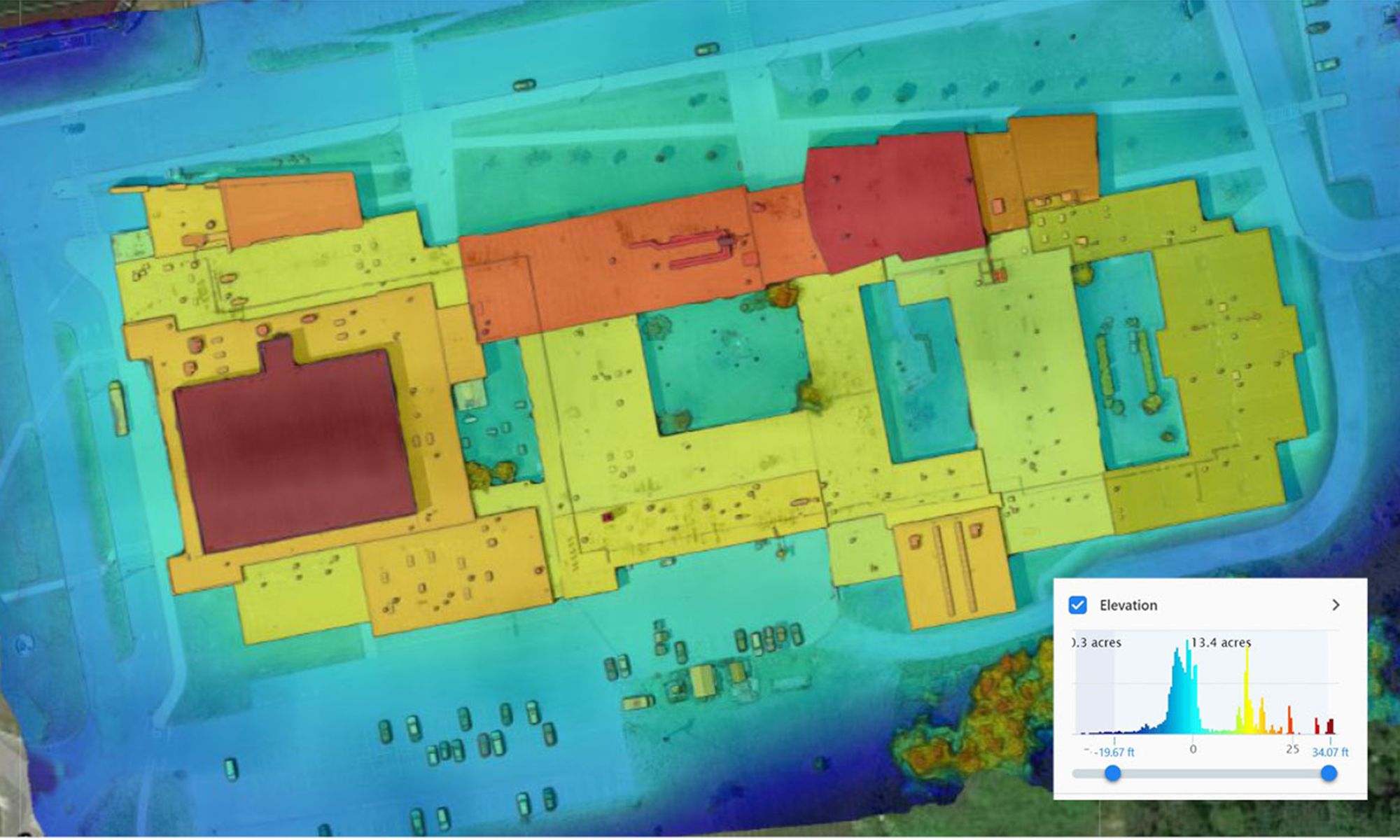 The elevation layer above gives us a better representation of different heights of the roof. It also helps to provide better contrast to see rooftop equipment like air handling units and vents. 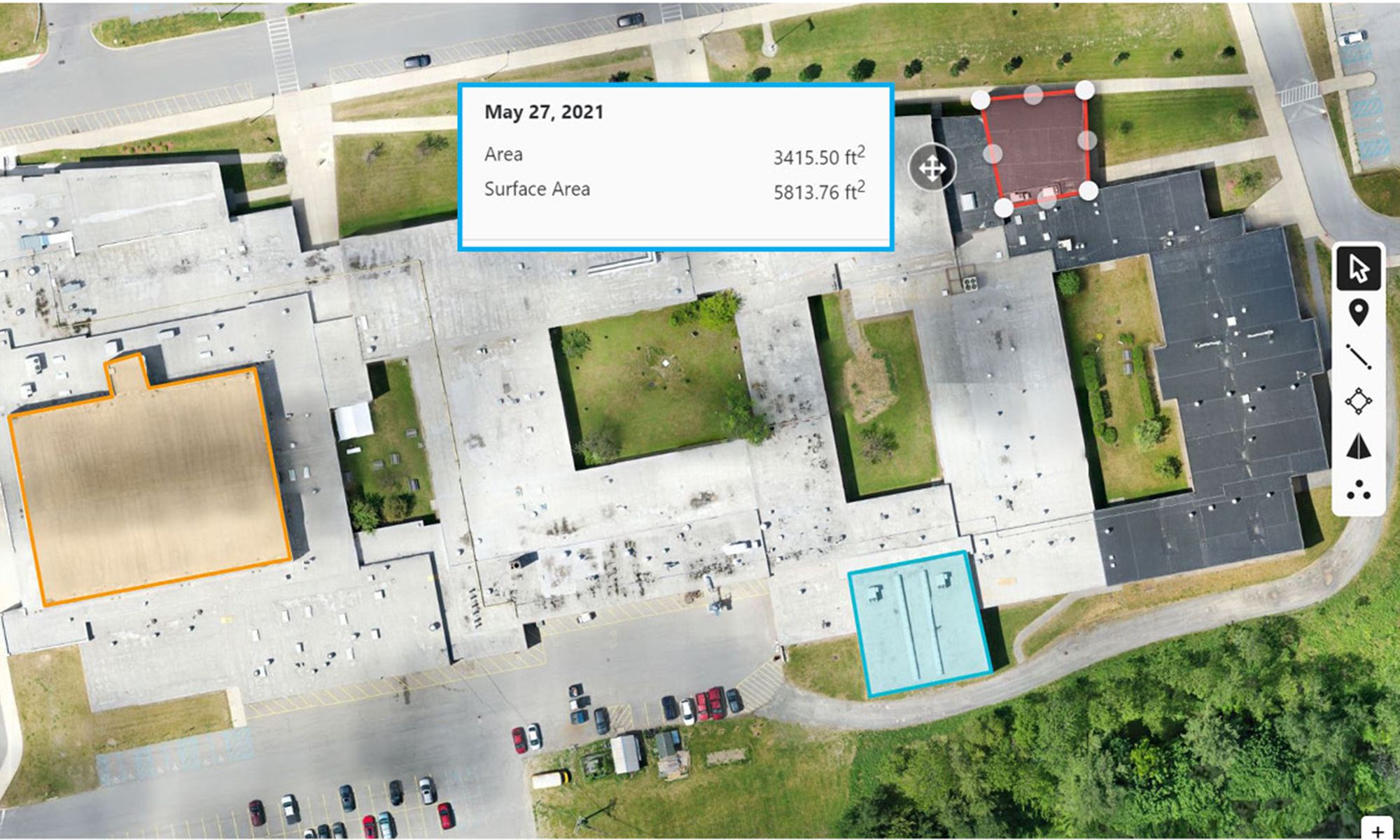 Because orthomosaic images do not have photo distortion, it can provide survery-grade accuracy for measurement of distances and areas of a roof.

Drones also provide us with 3D models of our projects using a process called photogrammerty. Using a similar process and photos from an 2D orthmosaic image, we can create a 3D model that can be zoomed in and rotated for 360 degree evaluation and measurement. This is similar to Google Maps Street View, where you can observe a 3D perspective of a traditional 2D map.

Photogrammetry gathers measurements and data of an object by analyzing the change in position from multiple drone images. It uses the photo's perspective, advanced processing software, and photo analysis to create a 3D model. By combining enough overlapping images of the same features, photogrammetry software can be used to generate photorealistic 3D representations of buildings.

Photos from our drone are uploaded into a 3D mapping engine that will define high contrast points in the photos and paste them together based on those points in 3 dimensions. It then renders a 3D model, overlays the graphics, and produces a Google Earth-style map. The 3D model is a accurate re-creation of the building. The image can be rotated 360 degrees and zoomed in for more detail. For the example 3D model below, our drone captured over 150 images in about 20 minutes. There are some “digital imperfections” in the model, which distort some areas of the image. For a more accurate model, more images would need to be taken from different angles to increase the fidelity. Overall, 3D models give us the ability to view a project in a new and engaging way. The next step will be to take this information and use it in Revit to aid the the design process of buildings.

We have flown over several of our project sites early in the pre-design stages to capture images where the project is being planned. Using those high-resolution images, our design teams overlay a realistic 3D rendering of the project. The result is a photorealistic view of what that project will eventually look like. Here are a few examples from the past year. 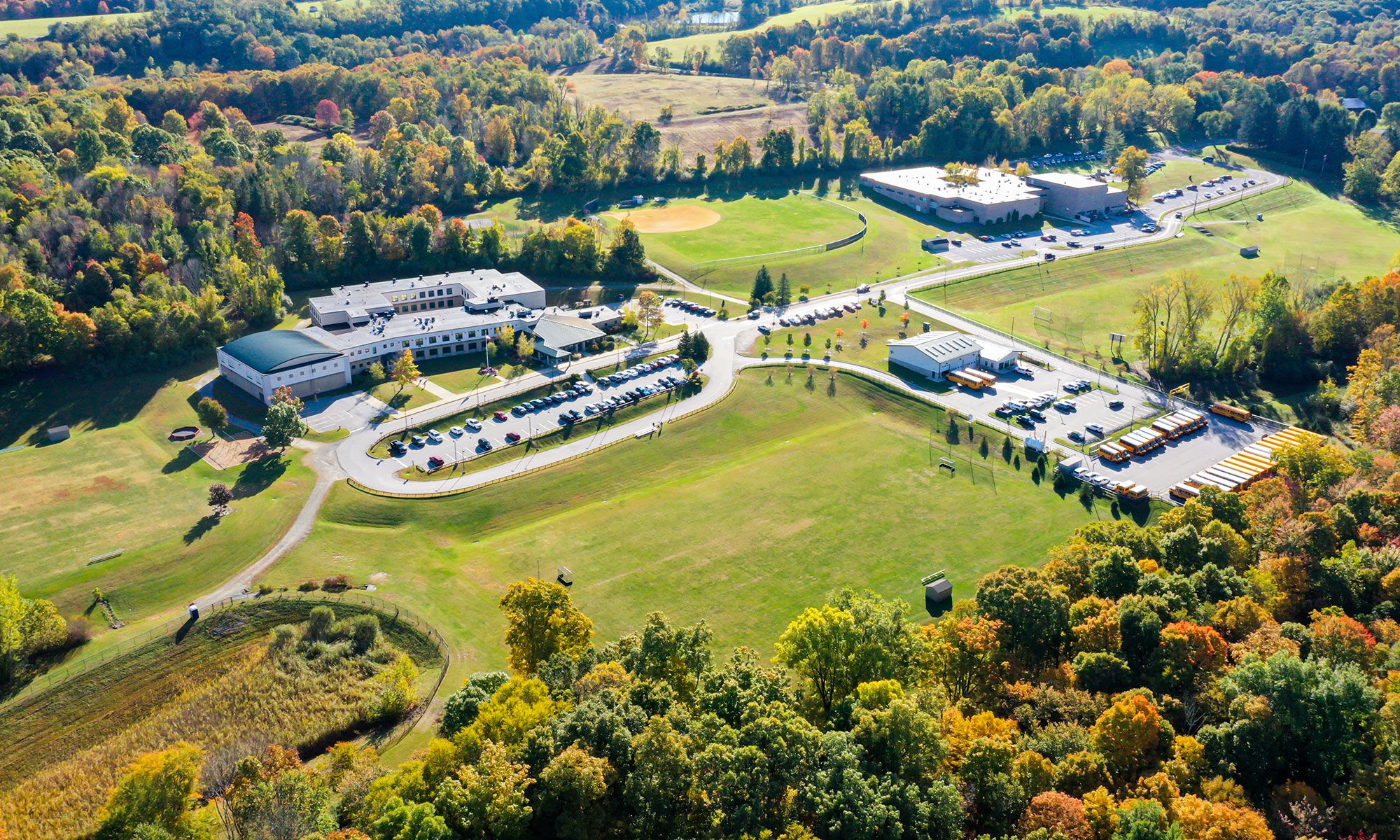 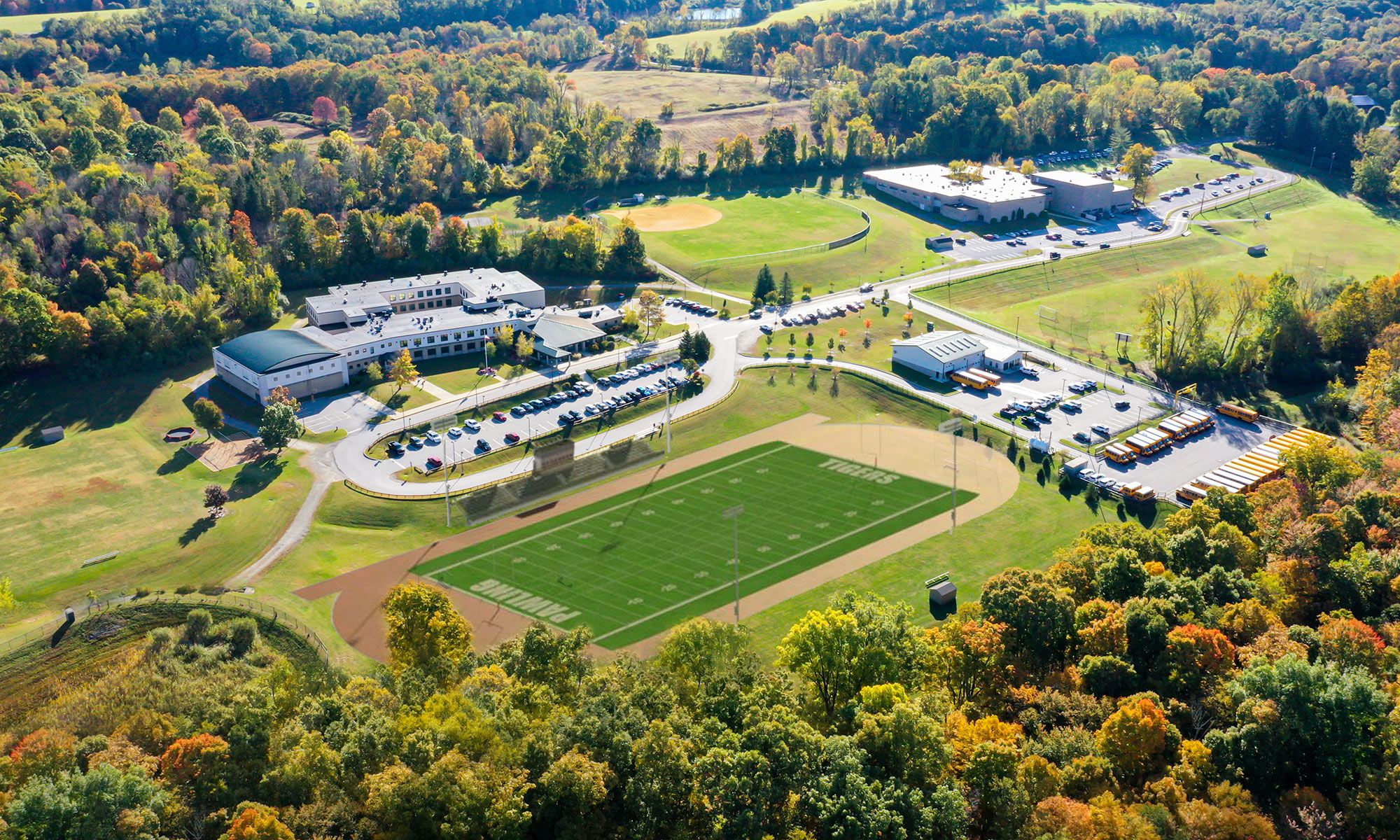 At Pawling Central School District, I took an aerial photo of the empty field, and our designers used the drone photo to overlay a rendering of the new athletic field. 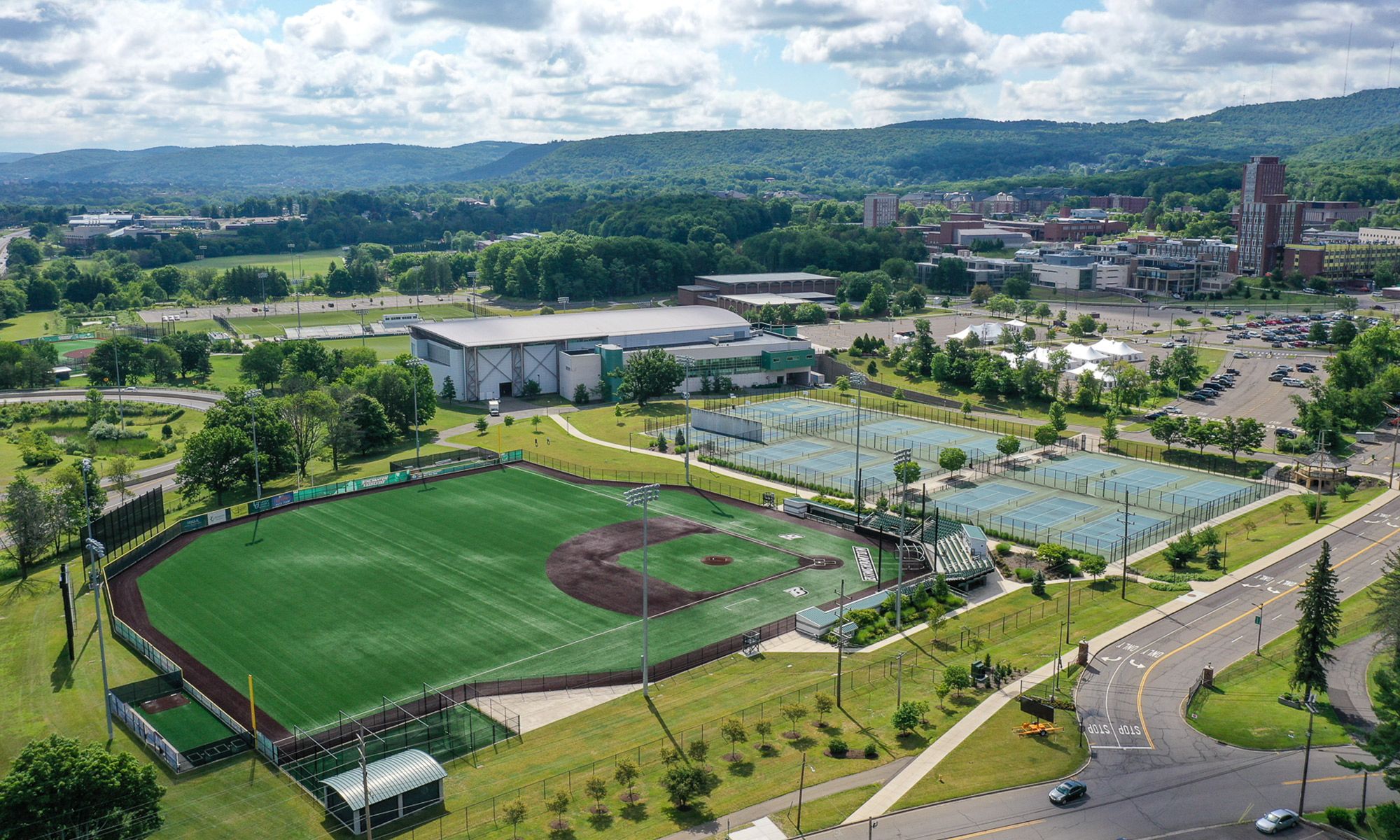 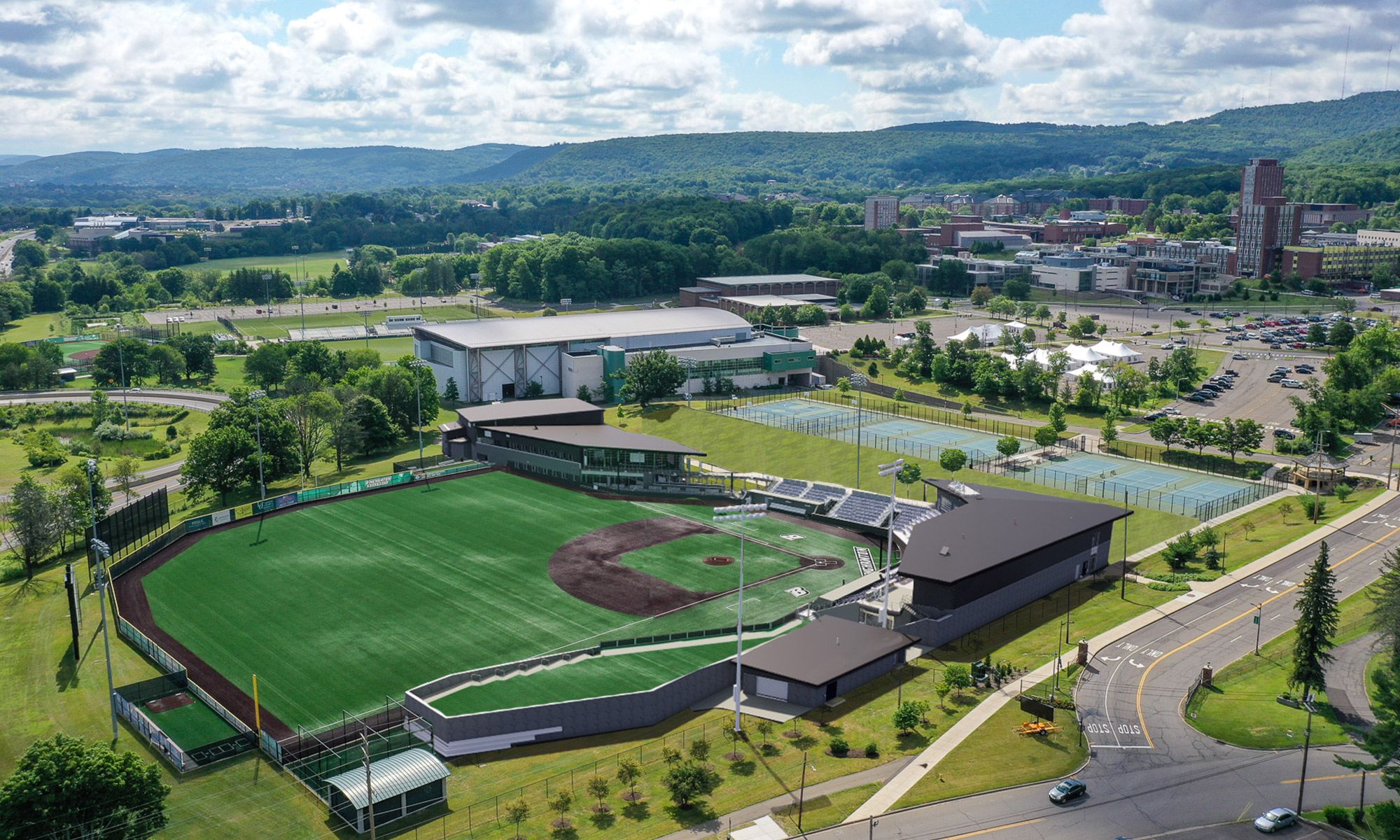 At Binghamton University, I captured an aerial image of the existing baseball stadium before construction. Our design team updated the photo with renderings of new bleachers, stadium and fieldhouse to visualize the final Baseball stadium. 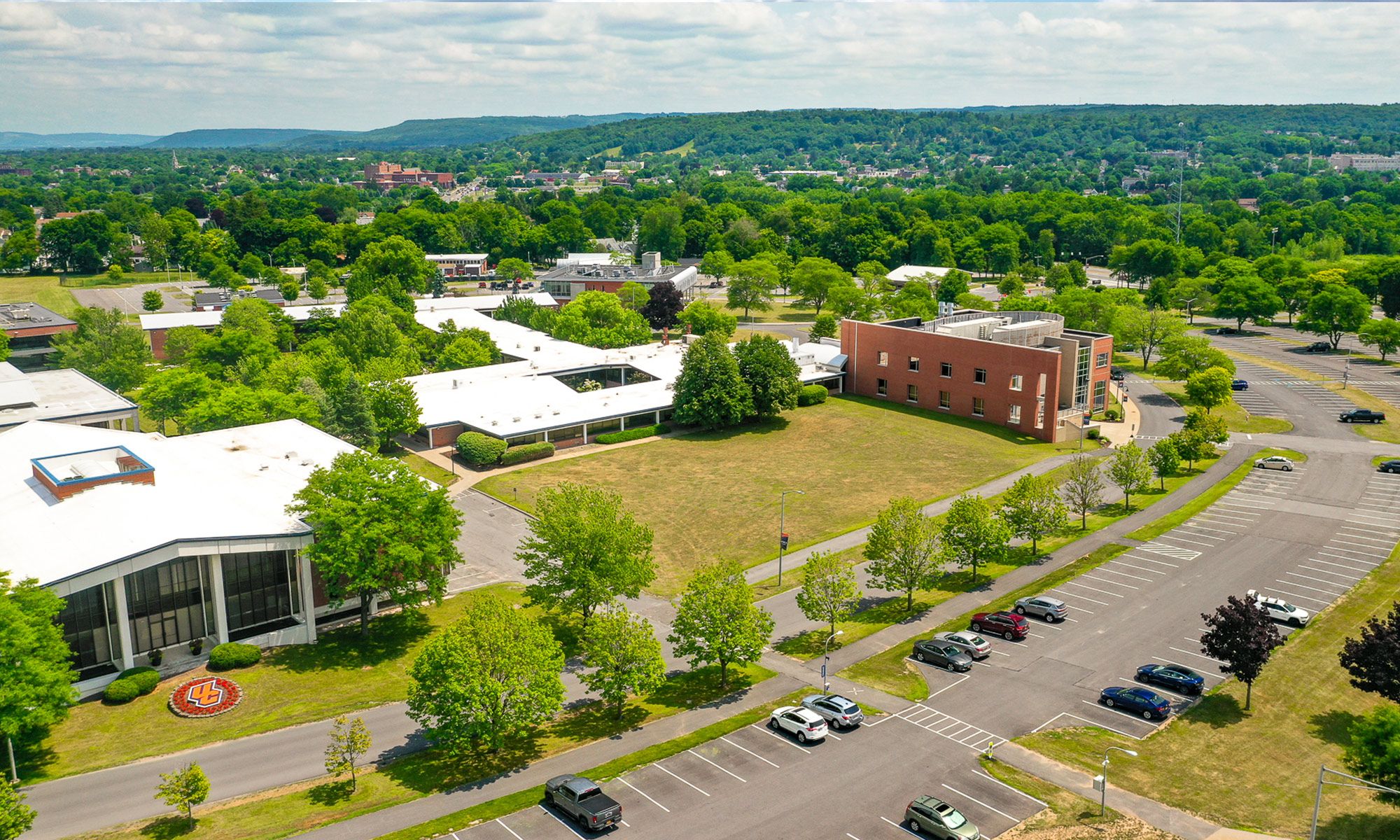 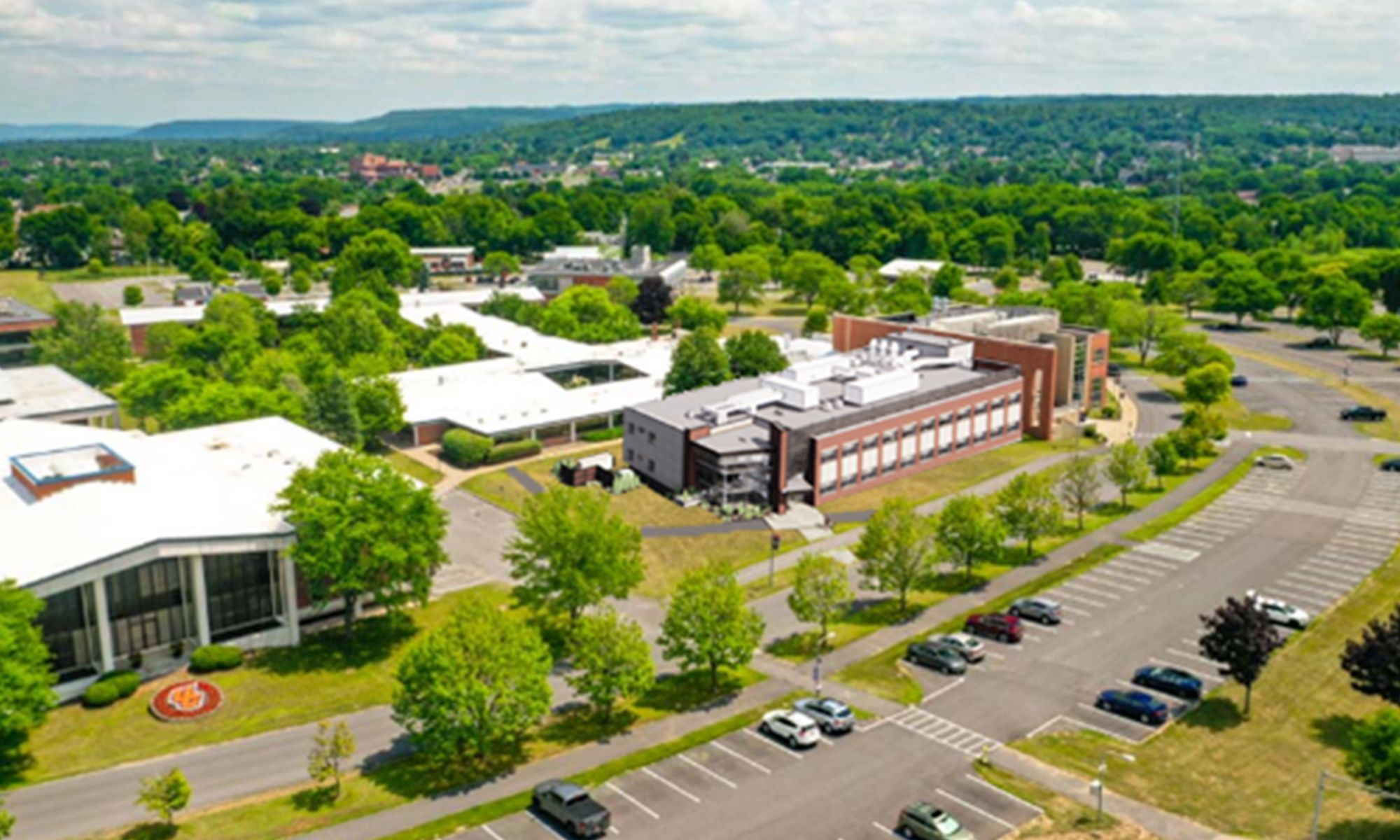 Before drones existed, aerial images were taken from a helicopter or airplane. Although the “old-fashioned” way produced good images, the process was inconvenient and very expensive. Drones can easily capture aerial images and video of building projects at lower, more reasonable altitudes. Our drone is becoming an essential part of our in-house photography toolkit as it provides higher resolution images than our DSLR camera with a “virtual” tripod that extends 400 ft into the air.

Drones allow design teams and building users to experience their projects from a different perspective. We are using drone video for marketing purposes, which enhances the experience of the design by offering a full, 360-degree visual. Cinematic flyovers of our projects provide an expansive view of our building projects within the context of the surrounding environment. Flyaround videos provide us with an intimate examination of details at levels out of reach at a human scale. 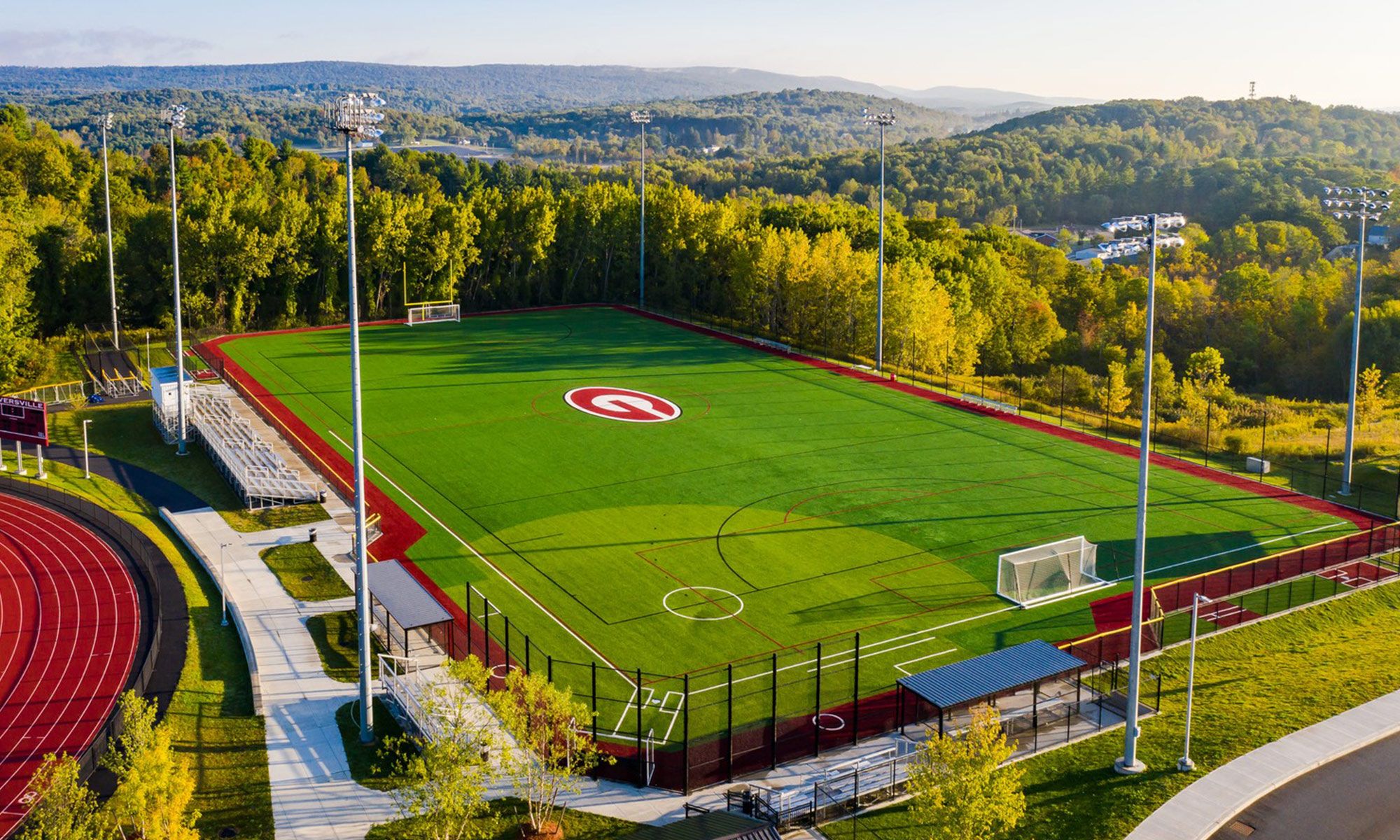 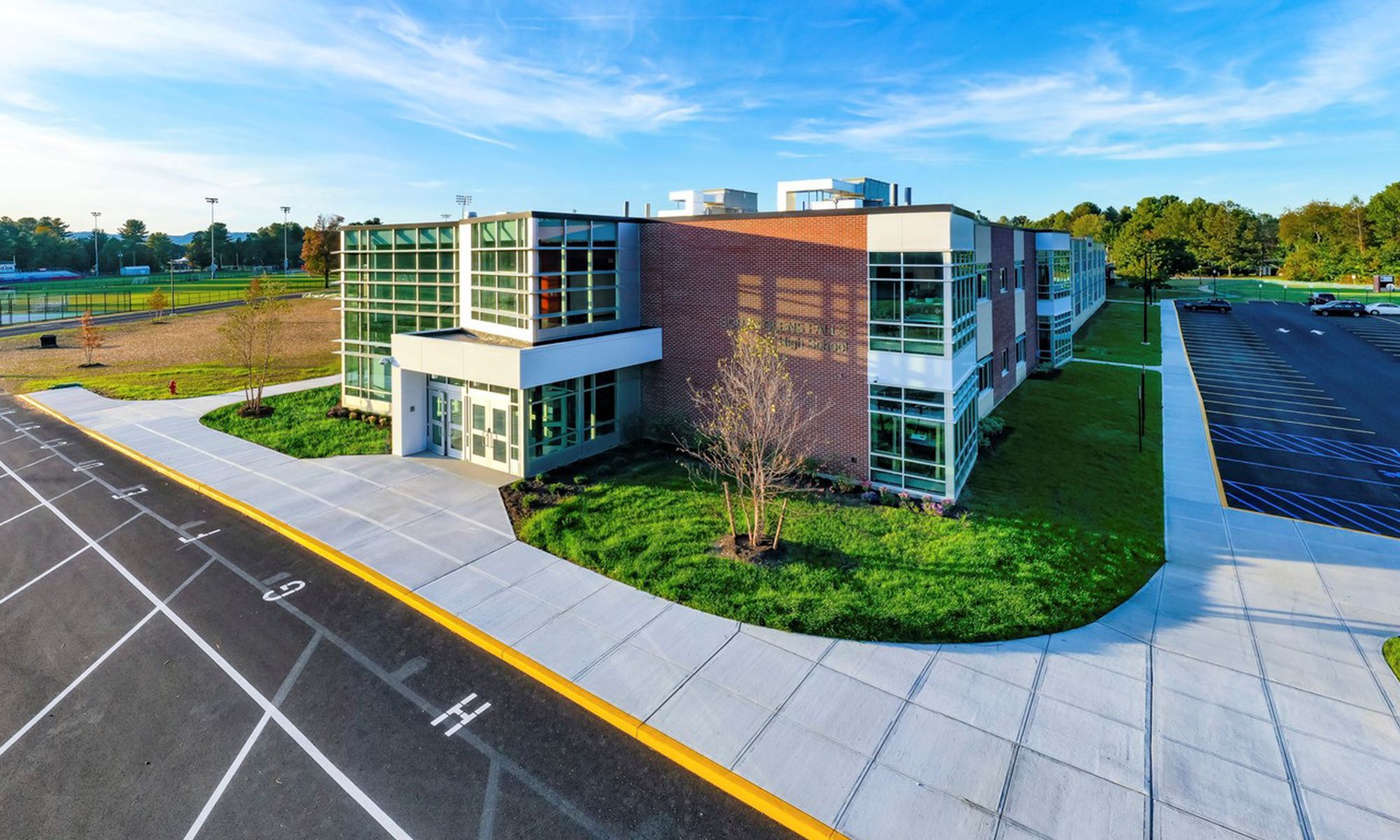 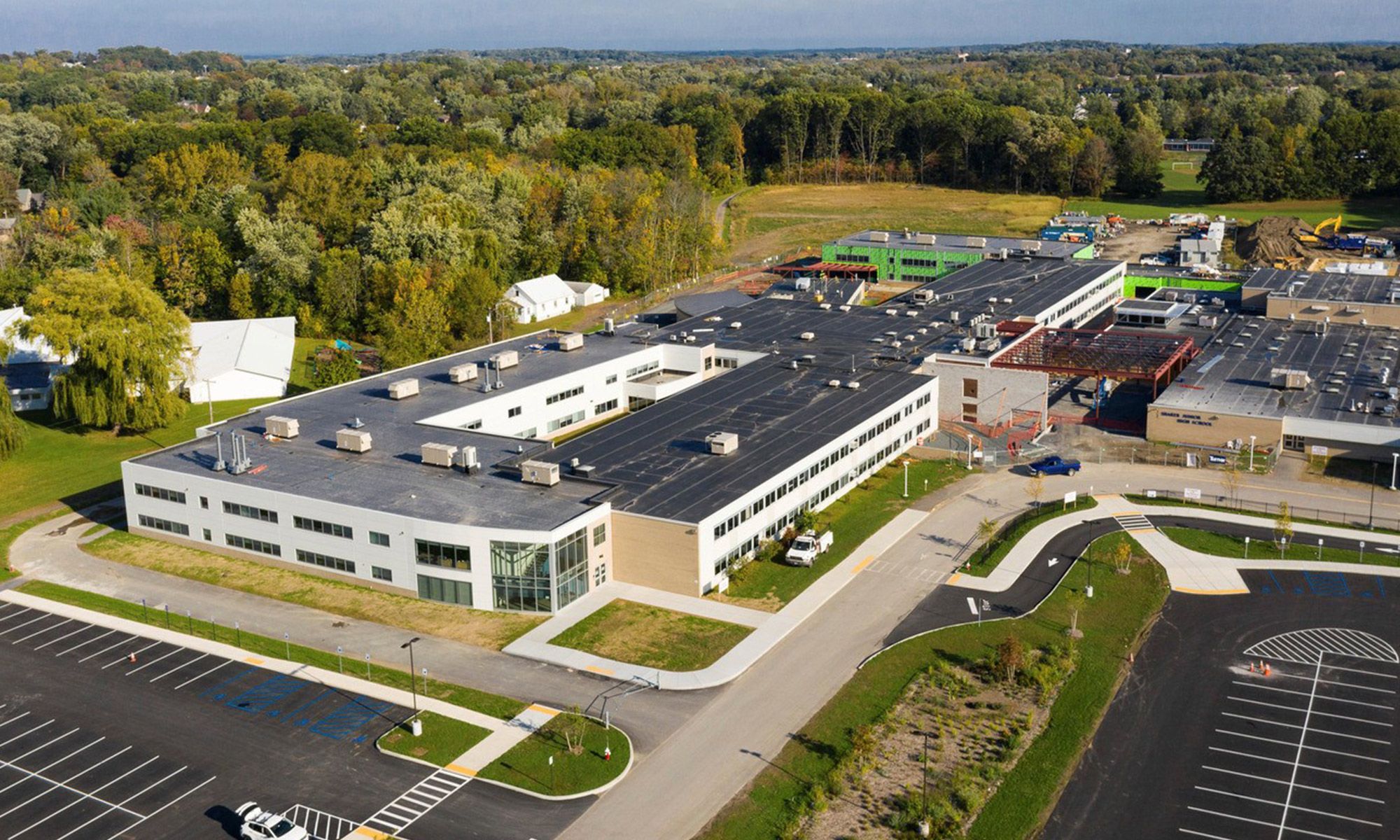 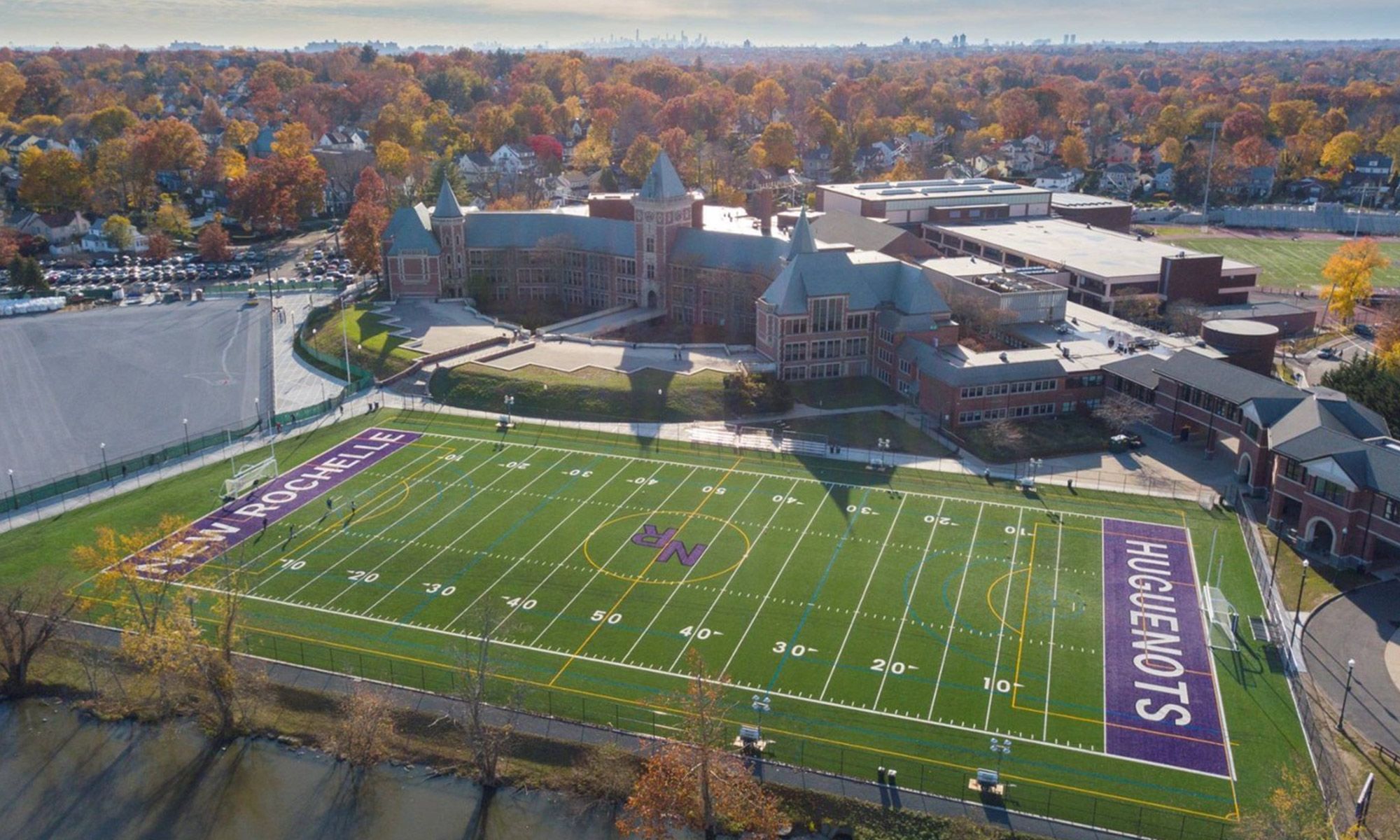 The number of ways we use drones at CSArch will undoubtedly increase over time as we continue to explore this new technology. The primary benefit of using drones is the ability to get visual information about a building or project site quicker and easier than before. The upside of saving time is, inevitably, reducing costs for data gathering efforts, while providing richer information, images, and video of our projects.