CSArch is proud to announce the promotions of several employees in recognition of their growth and contributions to the firm.

CSArch is proud to announce the promotions of several employees in recognition of their growth and contributions to the firm.

“Our people are our greatest asset. I’m proud to announce the promotion of seven employees who have exhibited exceptional performance and have demonstrated an unrelenting commitment to success at the firm,” said CSArch President, Daniel Woodside, AIA LEED AP. 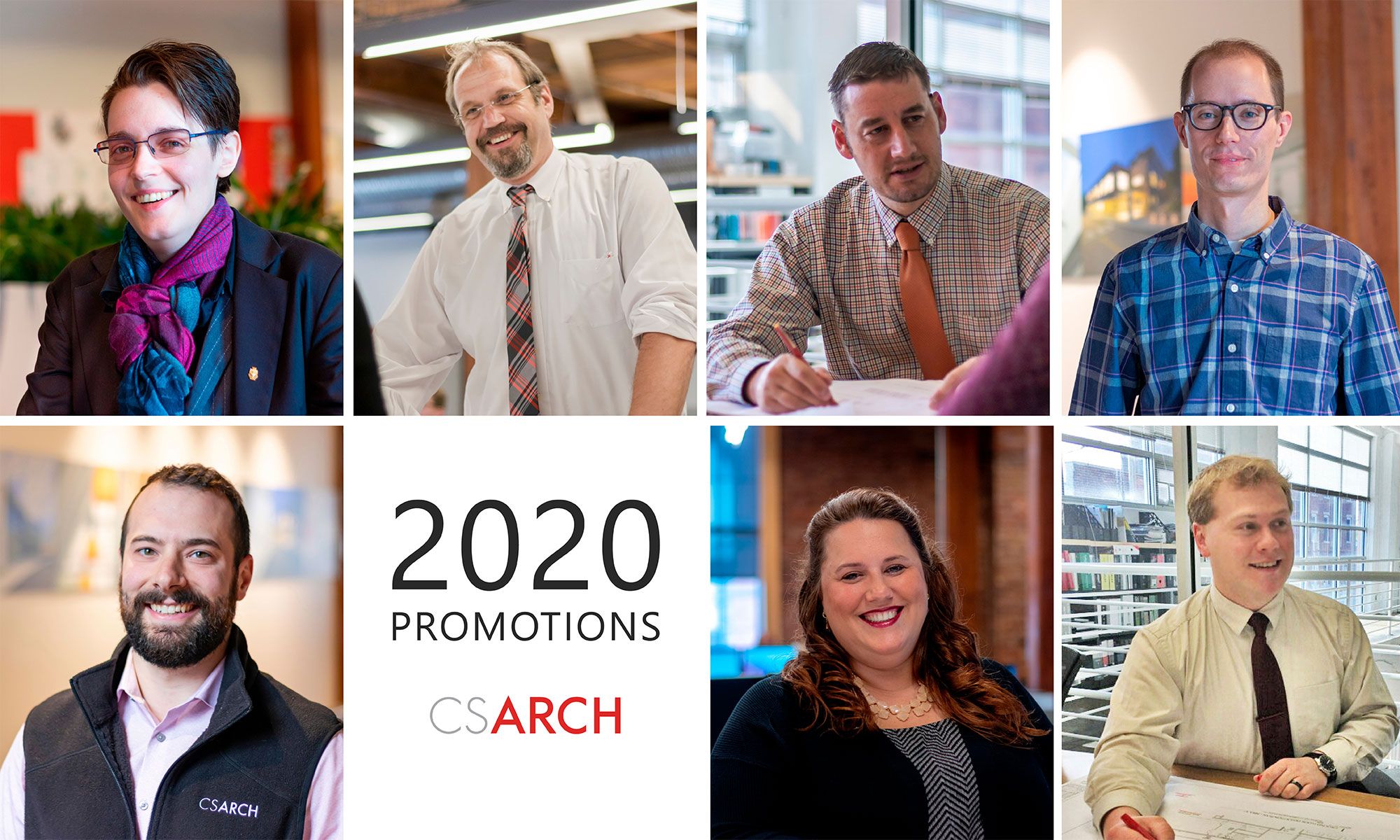 Volker Husel was promoted to Principal in recognition of his leadership in advancing the firm’s mission to improve design and project management practices at CSArch. In his role, he will have one singular focus – to make CSArch better. Leading the quality assurance group, Volker will spearhead the development of processes to foster improved collaboration and information exchange at CSArch. Husel joined CSArch in 2016 and became a licensed architect in December 2018.

A building designer who’s been with the firm since October 2003, Melissa Renkawitz was promoted to Senior Associate. Renkawitz has had a major impact on developing the technical aspects of the firm’s most successful capital projects at Coxsackie-Athens CSD, Menands SD and Guilderland CSD. She consistently represents the firm’s value for top quality work and is appreciated by clients, partners, and colleagues alike for her passion and technical expertise.

Caitlin Daly joined the firm in 2015 and became a licensed architect in 2018. A valuable resource in our BIM initiatives, Daly has been promoted to Associate. She has played an instrumental part in CSArch’s most important projects including our work with Albany High School, Greater Johnstown CSD and Kingston CSD. Daly brings a unique sense of exploration and critical thinking to projects at CSArch, ensuring projects meet all standards and guidelines while adding a layer of quality control to each phase.

With CSArch since 2016, Matt Heiser has been promoted to Associate in recognition of his significant impact as a licensed architect at CSArch. Working closely with project teams, Heiser ensures that design solutions reflect client needs. He has been an integral part of the CSArch team and has contributed to successful K-12 project work including North Colonie CSD, Queensbury UFSD, Keene CSD and Guilderland CSD.

Dion Miller has been promoted to Associate. With CSArch since 2016, Miller has been a critical component to the success of the firm’s Newburgh office. He is responsible for evaluating existing conditions, programming, construction administration services, and producing design and construction documents. His positive contributions span across several K-12 school districts including Fallsburg CSD, Clarkstown CSD, Marlboro CSD and New Rochelle CSD.

Joining CSArch directly out of college in 2013, Craig Zygmund has been promoted to Associate. Zygmund has been a key team member for important K-12 projects for East Greenbush CSD, The City School District of Albany, and Johnstown CSD. A talented Building Designer, Zygmund solves the firms most complex design problems while translating the vision and ideas of a client into its physical form.

Matthew Zyrkowski joined CSArch in April 2019 and has been promoted to Associate after quickly making a positive impact as a Project Manager at the firm’s Newburgh office location. Zyrkowski ensures that each project satisfies clients’ needs and design requirements, from concept design through construction closeout. He is currently managing capital project work with Marlboro CSD and New Rochelle and is also heavily involved in the renovation of the Boys & Girls Club in Newburgh.